As a result of meeting a CTC member from Bradford in the Bed & Breakfast establishment at which they stayed, Charlie makes the momentous decision to join the Cyclists Touring Club in the following year, a decision which took over his life for the rest of his days.  It was a decision which brought him a wife and a richness of life beyond compare.

And we are privileged to enjoy that life of his through his Journals, bringing us such understanding of the pre-war cycling scene.  Today is also a bit of a history lesson so please read on…

You might think that the bad weather god would have left them alone in late August, but he didn’t, and as we all know a long ride all the while into a strong headwind is very strength sapping.

Nevertheless, it was an excuse to see his Uncle so with a reluctant companion in tow, off Charlie went.  The sting for today is in the tail – the very last sentence.  Priceless !

Charlie is very deprecatory about motor cycles in today’s piece, but I am going to let you into a secret.  His father had an old motorbike at this time (as did my father in 1922) Charlie’s younger brother Norman acquired one a few years later, and in his late 50’s Charlie also bought one in order to commute to work in Manchester.

So I think we can excuse him, don’t you !

Today, we get the full flavour of what it means to be Charlie Chadwick.  He only starts out in the afternoon because he doesn’t feel well, with the intention of riding for an hour or two.  Really !  He returns home eight and a half hours later having covered 73 miles.  Once that lad gets on a bike common sense seems to leave him.  His excuse must be those beautiful Cheshire Lanes which have their special charms, including the obligatory puncture.

As Blackrod was the place that I was brought up I am all too familiar with those hills. Interestingly Charlie describes the steepest of those as Crown Lane but that is not a name that I have ever heard used for it. As far as I know its name has always been Station Road, not least because it leads to Blackrod Railway Station. But to me, and to everyone else living in Blackrod, this hill is known as Tanners Brow !

I would certainly agree with Charlie’s assessment and call it suicidal for cyclists – although whether he intended that to refer to the ascent or descent he doesn’t make quite clear. I know that, thankfully, I could always manage to find an alternative route.

On the other hand the long drag up into Horwich was, and still is, called Crown Lane – because The Crown Hotel is situated at the top. 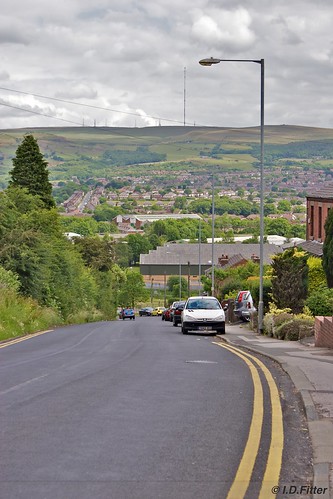 This is the view looking down Station Road (Tanners Brow) – its quite steep, and in the left upper distance you will see the straight Crown Lane heading towards the Crown Hotel in Horwich.